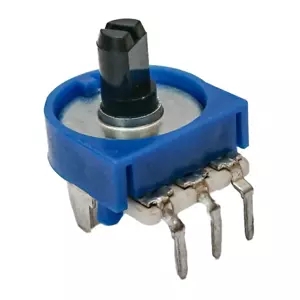 A potentiometer is an adjustable electronic component. It consists of a resistor and a rotating or sliding system. When a voltage is applied between the two fixed contacts of the resistor body, the position of the contact on the resistor body is changed by rotating or sliding the system, and a moving contact position can be obtained between the moving contact and the fixed contact. A certain relationship of voltage. It is mostly used as a voltage divider, in which case the potentiometer is a four-terminal element. A potentiometer is basically a sliding rheostat. There are several types of potentiometers. They are generally used for speaker volume switches and laser head power adjustment. Potentiometers are adjustable electronic components.

A potentiometer is a type of variable resistor. It is usually composed of a resistor body and a rotating or sliding system, that is, a moving contact is moved on the resistor body to obtain a partial voltage output.

A potentiometer is a resistance element with three lead-out terminals whose resistance can be adjusted according to a certain change law. A potentiometer usually consists of a resistor and a movable brush. When the brush moves along the resistor body, a resistance value or voltage having a certain relationship with the amount of displacement is obtained at the output end.

The key parts that make up a potentiometer are resistors and brushes. Potentiometers can be classified into several types according to their structural form and whether they have switches.

Synthetic carbon film potentiometer: It has the characteristics of wide range of resistance value, good resolution, simple process, low price, etc., but it has large dynamic noise and poor moisture resistance. This type of potentiometer should be used as a functional potentiometer, which is widely used in consumer electronics. The printing process can be used to automate the production of carbon diaphragms.

Conductive plastic potentiometer: wide range of resistance value, high linear accuracy, strong resolution, and particularly long wear life. Although it has a large temperature coefficient and contact resistance, it can still be used in analog and servo systems in automatic control instruments.

Digital potentiometer: Potentiometer made by integrated circuit technology; a string of resistors is integrated into a chip, and a MOS tube is used to connect the resistor in series with the public terminal; the control accuracy is determined by the number of bits controlled, generally 8 bits, 10 bits, 12 bits, etc .; can be used in analog circuits for impedance matching, amplification loop control, etc .; avoids the trouble of jitter adjustment operation; and provides a convenient way for the device’s automatic gain, voltage change, impedance matching, etc.

Structural classification
Rotary: common form. The usual rotation angle is about 270 ~ 300 degrees.
Single-turn: a common form.
Multi-turn type: used for occasions where precise adjustment is required.
Linear sliding type: usually used in the mixer, it is easy to immediately see the volume position and fade control.

Quantity classification
Single type: one shaft controls only a single potentiometer.
Dual type: two potentiometers are controlled by the same shaft, which is mainly used in two channels, and can control two channels at the same time.

Other special types
Potentiometer with switch: Usually used to combine the volume switch with the power switch, that is, turn it counterclockwise to the bottom to cut off the switch and turn off the power. 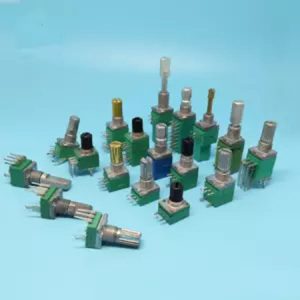