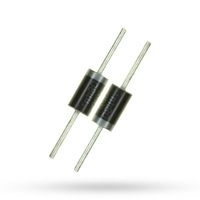 Diode is one of the earliest semiconductor devices, and its application is very extensive. Especially in various electronic circuits, using diodes and resistors, capacitors, inductors and other components to make reasonable connections to form circuits with different functions can achieve rectification of AC power, detection of modulated signals, limiting and clamping, and power supply Various functions such as voltage stabilization.

Surface contact diode
The surface-contact diode has a large PN junction contact area, can pass a large current, and can withstand a high reverse voltage, which is suitable for use in rectifier circuits.

Zener
Zener tube is a special surface contact type semiconductor silicon diode, which has the function of stabilizing voltage. The main difference between a zener tube and an ordinary diode is that the zener tube works in the reverse breakdown state of the PN junction. By restricting the magnitude of the reverse current during the manufacturing process and during use, it can be ensured that the voltage regulator tube will not be damaged by overheating in the reverse breakdown state.
The zener diode is different from ordinary diodes. Its reverse breakdown is reversible. As long as it does not exceed the allowable value of the zener current, the PN junction will not be overheated and damaged. The original performance, so the voltage regulator has good repeated breakdown characteristics.

Photodiode
Photodiodes are also called photodiodes. It has a glass window on its case for easy access to light. Its characteristic is that when light is irradiated to its PN junction, free electrons and holes can be generated in pairs, so that the concentration of minority carriers in the semiconductor is increased. The current increases. Therefore, its reverse current increases linearly with increasing light intensity.
When there is no light, the volt-ampere characteristics of photodiodes are the same as ordinary diodes. Photodiode as a light control element can be used in various object detection, photoelectric control, automatic alarm and so on. When made into a large-area photodiode, it can be regarded as a source of energy and called a photovoltaic cell. At this time, it does not need an external power supply, and can directly convert light energy into electricity.

led
A light emitting diode is a semiconductor solid-state display device that directly converts electrical energy into light energy, referred to as LED. Similar to ordinary diodes, light emitting diodes are also made of a PN structure. The PN junction of the light emitting diode is packaged in a transparent plastic case, and the shapes are square, rectangular, and circular. Light-emitting diodes have low driving voltage and small working current, and have strong resistance to vibration and shock, small size, high reliability, low power consumption and long life. They are widely used in signal indicating circuits.
In the digital tube commonly used in electronic technology, the principle of light-emitting diodes is opposite to that of photodiodes. When a light-emitting diode is forward-biased through a current, it emits light. This is due to the energy released when the electron and hole are directly recombined. Its spectral range is relatively narrow, and its wavelength is determined by the basic materials used. 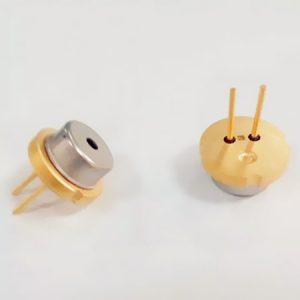