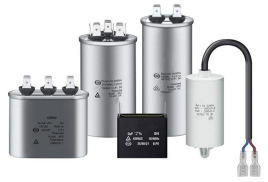 A gas dielectric capacitor is a device that stores charge and electrical energy, consisting of two electrodes made of close and insulated conductors. Power capacitors are used in power systems and electrical equipment. The size of the capacitor is determined by its geometric size and the characteristics of the insulating medium between the two plates.