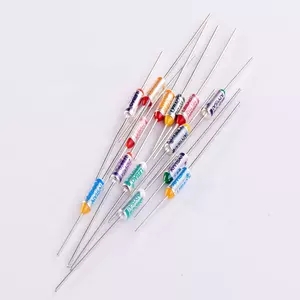 The thermal fuse is also called thermal fuse, it is a temperature sensing circuit cutting device. The temperature fuse can sense the overheat generated in the abnormal operation of electrical and electronic products, thereby cutting off the circuit to avoid fire.

★Turn off the power at once.

★Painted with the most advanced automated test equipment, 100% after the inspection.

★It meets the environmental requirements of ROHS/REACH.

There are many ways to construct a temperature fuse, the following three are more general:
The first type: organic type temperature fuse
It consists of sliding contact, spring, and electrically nonconductive thermalpellet. Before the thermal fuse is activated, current flows from the left lead to the sliding contact, and to the right lead through the metal housing. When the external temperature reaches a predetermined temperature, the organic matter melts and the compression spring becomes loose. That is, the spring expands, and the movable contact (slidingcontact) is separated from the left lead. The circuit is opened, and the current between the sliding contact and the left lead is cut off.

The second kind: porcelain tube type temperature fuse
It is composed of an axisymmetric lead, a fusible alloy that can be melted at a specified temperature, a special compound to prevent its melting and oxidation, and an insulating ceramic tube. When the surrounding temperature rises, the specific resin mixture begins to liquefy. When the melting point is reached, with the help of the resin mixture (increasing the surface tension of the melted alloy), the melted alloy rapidly shrinks around the two ends of the lead under the action of the surface tension Spherical shape, thus permanently cutting off the circuit.

Although the thermal fuse has high reliability in design, the abnormal situation that a single thermal fuse can cope with is limited after all. Coupled with man-made or unpredictable force majeure, the thermal fuse is damaged and cannot function normally. When the machine is abnormal, it will not be able to cut off the circuit in time. Therefore, when the machine is overheated, when the erroneous operation directly affects the human body, when there is no circuit to cut off the device except the fuse, and when high safety is required, more than two temperature fuses with different melting temperatures should be used.

The thin temperature fuse is specially developed for lithium-ion battery over-temperature protection. Its working principle is the same as the second temperature fuse mentioned above. The low melting point alloy is used to connect the circuit. Connected and sealed by plastic material. When the battery internal or external short circuit or other reasons cause the internal temperature of the battery to rise to a certain level, the thermal fuse next to the battery will quickly blow, thereby cutting off the battery’s external circuit and preventing the battery from exploding and causing life injury. As handheld electronic devices need to be more and more portable, the size of the thermal fuse needs to be as small as possible, and as thin as possible. The thinnest current thermal fuse can be 0.65mm thick and the width can be 2.7mm. The internal resistance of the temperature fuse is also very small, only about 8mΩ, and the power consumption in the standby state is very small, which can greatly increase the standby time of the lithium ion battery.

It also has certain shortcomings. First of all, it is unrecoverable. Unlike PTC, even if an accidental fault causes PTC action, once the fault is removed, the battery can continue to work. Once the thermal fuse is activated, the entire battery can no longer work. Of course, as the quality of lithium-ion batteries is getting better and better, the probability of such accidental failures is getting smaller and smaller. Once an abnormality occurs, the battery will not be allowed to continue to use, but it has become the advantage of a thermal fuse. Second, it cannot be welded and processed by ordinary methods, such as PPTC, which can withstand the high temperature for a short time, so it can be welded through a reflow oven and can be directly injected into the battery, but the temperature fuse can only be spot welded, laser Welding and other local welding methods to prevent the temperature fuse from blowing.

According to the material: it can be divided into metal shell, plastic shell, oxide film shell. 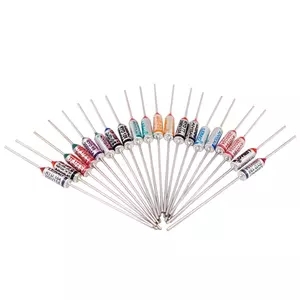 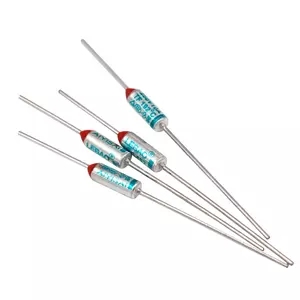