Compressed air circuit breakers use high-pressure air to blow and extinguish arcs. During its operation, the high-speed air current blows the arc column to produce a strong heat dissipation and cooling effect, which causes the arc column to thermally ionize, and quickly weakens and even disappears. After the arc is extinguished, the arc gap is replenished with fresh compressed air, and the dielectric strength is quickly restored.

① Fast action and short on-off time. One-cycle circuit breakers have been used in the 1970s, which greatly improved the stability of the power system.

② It has a higher breaking capacity and can meet the higher rated parameters and performance requirements proposed by the power system.

③ It can adopt building block structure, which has strong series. Its disadvantages are complex structure, high processing and assembly requirements, more non-ferrous metals are required, the price is higher than oil circuit breakers, and air compression devices are added when used.

The direction of the air flow is perpendicular to the axis of the arc. The compressed air stream blows the arc into the baffle, so the arc has a tortuous shape, the length increases, and it is in close contact with the baffle, which accelerates the removal of ionization process. Although the lateral arc blowing method has a better arc extinguishing effect, the arc extinguishing chamber has a complex structure and a large volume. It is generally only used in circuit breakers with lower voltage levels (such as generator protection circuit breakers), and is not suitable for high voltages. Large capacity occasions.

Compressed air moves at high speed along the axis of the arc and blows the arc strongly, thereby reducing the diameter of the arc, cooling the surface, and removing ionized particles from the arc gap. Disadvantages of this structure are that the vicinity of the tip of the contact is not easily blown by the air and is susceptible to arc burn. Metal vapor in the arc gap tends to reduce the strength of the arc gap medium and the arc is liable to reignite.

Compressed air removes the ionized particles from the arc gap and is quickly discharged into the atmosphere through the hollow static contact. The air blow moves the arc from the working surface of the static contact nozzle to its inner surface. The solid contact ends are conical.

When opening and closing, the solid moving contact leaves the static contact, and an arc occurs outside the arc extinguishing chamber. When the moving contact enters the body of the arc extinguishing chamber and the nozzle is completely opened, the compressed air rushes into the atmosphere, causing the arc to be strongly blown horizontally and vertically.

The compressed air initially blows the arc radially and then divides it into two air streams blowing the arc longitudinally. For dual nozzles, both arc roots are on the inside surface of the contact. Bidirectional arc blowing removes ionized particles from the arc gap more quickly than unidirectional arc blowing. But the arc gap pressure is low. In order to increase the gas pressure in the arc gap, one of the hollow contacts can be made into a contracted section, which becomes a two-way asymmetric longitudinal blow. 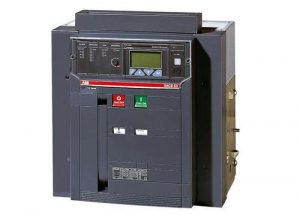